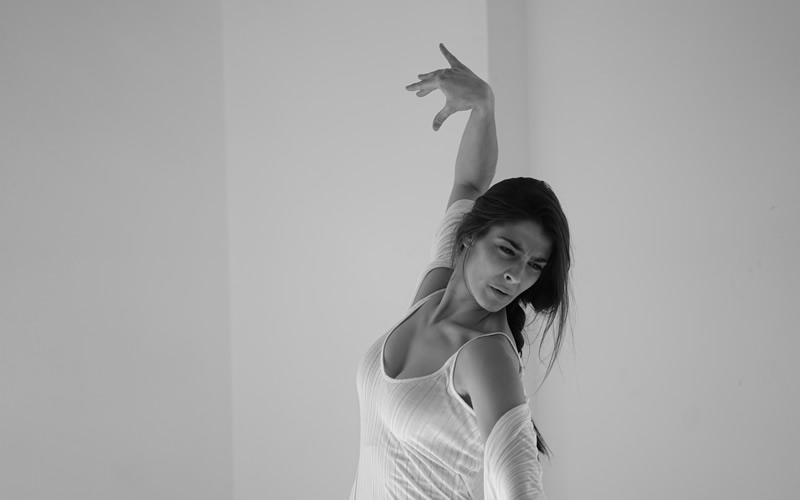 This Tálamo, a feverish cloud, that fuses so much moist passion, is the flower that blossoms in each of our oceans. It leaves us marked with the dance like tricapitate stigmas, and with each of the notes that envelop the most profound of songs.”

Born in Madrid but based in Seville, Mónica Iglesias graduated in Spanish Dance and Flamenco from the Royal Professional Dance Conservatoire in Madrid. Her career started out in the companies of Joaquín Cortés, Aída Gómez, and Rafaél Estévez & Nani Paños. In 2011, she joined the Flamenco Ballet of Andalusia under Rubén Olmo. She then became leading dancer with the Antonio Gades Foundation, performing the main role in Carmen. In 2013, she joined the Spanish National Ballet, directed by Antonio Najarro, where she still performs as soloist. She has collaborated in projects such as Flamenco Hoy directed by film-maker Carlos Saura and has performed in some of the most important theatres and flamenco festivals in Spain and abroad with artists such as Rocío Molina, Antonio Canales, Chano Domínguez and David Peña Dorantes, among many others. She features regularly in flamenco performances at the Corral de la Morería in Madrid, Tablao Cordobés in Barcelona and the Tablao Flamenco Los Gallos in Seville. In 2018, she received the first “Desplante” award at the Cante de Las Minas Festival, and in 2019 gave the first performance of her own show, Bravata, in Madrid.