DAMES AND GODDESSES IN THE MUSEUM

DAMES AND GODDESSES IN THE MUSEUM

Free admission, limited seating. Tickets must be collected from the ticket desk as from two hours before the start of the concert.

For the first time, Ellas Crean is presenting a work that has been conceived expressly for the festival. It is a concert of contemporary music devised by Teresa Catalán (winner of the Spanish National Award for Music Composition), with collaboration from the Asociación Mujeres en la Música (AMM), that showcases the huge creativity of Spanish women composers, so often missing from programmes in the large concert halls. Five works for percussion performed by women, all of them first performances, interspersed with poetry also written especially for this event. Five female sculptural figures from the Spanish National Archaeology Museum serve as inspiration for Damas y Diosas en el Museo, an innovative and visually powerful concert.

Five female sculptured figures in the National Archaeological Museum inspire the compositions for percussion and the poems presented in this concert. 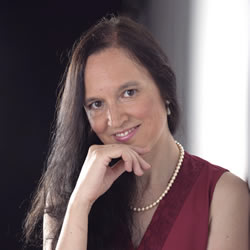 Born in Madrid, where she studied Organ and Composition at the Real Conservatorio Superior de Música. In 2005, she received a PhD in Philosophy from the Universidad Nacional de Educación a Distancia.

Among her recent works is the piece for orchestra Llueven estrellas en el mar, which was commissioned by the Fundación Autor-AEOS-JONDE and performed at the Young Euro Classic Festival in Berlin. 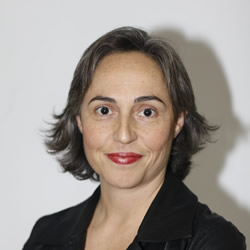 Born on Grand Canary island in 1978. She studied piano, oboe and composition at the Conservatorio Superior de Música de Las Palmas and the Academia de la Orquesta Filarmónica de Gran Canaria, where her composition teachers were Daniel Roca and Xavier Zoghbi. She obtained the professional qualification in oboe and higher qualifications in piano, theory and composition. For the latter she received the Special End-of-Degree Award. She continued studying with José Luis de Delás at the Universidad de Alcalá de Henares and with José Mª Sánchez Verdú at the Soto Mesa school in Madrid. In 2016 she received her doctorate in History of Art / Musicology from the Universidad de La Laguna in Tenerife. Her catalogue includes more than fifty works. Among those for orchestra, she has written concertos for oboe, piano and percussion. Since 2003 she has been teaching composition at the Conservatorio Superior de Música de Canarias where she currently holds the position of Deputy Director. Between 2008 and 2011 she was Chair of the Asociación de Compositores Promuscán, and since 2011 has been a member of the Real Academia Canaria de Bellas Artes. 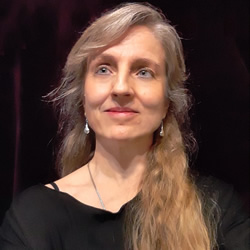 She studied composition with Javier Darias at the Escuela de Composición y Creación Artística (ECCA) and reached the finals of the Ciutat d’Alcoi 1990 and SGAE 1991 awards.

Her orchestral works include three symphonies (L’Smaylied, Tamaragua and Jornmoldau), a symphonic poem (Concierto de los Sentidos) and a double concerto for piano, clarinet and orchestra (L’Esguard). Most of her chamber works have been recorded and published by EMEC (Madrid) on nine collective discs and on her own CD Carmen Verdú, Obra Camerística. She has participated in international festivals, with first performances in Bucharest, Kishinev, Odessa, Havana, Munich, Bonn, Cologne, Brussels, Liège, Odessa, Bacau, Warsaw, Cracow, Iasi and Trieste by orchestras such as the RTVM Symphonic Orchestra (Republic of Moldova), National Philharmonic Orchestra of Moldova, Orquesta Sinfónica de Galicia, and groups such as Koan, Archaeus Ensemble, Florilegium String Quartet, Ars Poetica Ensemble, Grupo Cosmos, Plural Ensemble, Grup Instrumental de València and Game Percussion Ensemble. Four of her works were included in the programme of the World Music Days 1990. She devised the first concerto for the hearing-impaired using the Verbotonal System, performed by the OSG (A Coruña). 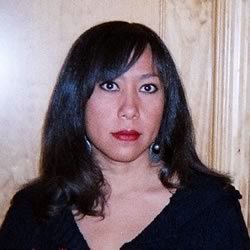 Born in Venezuela, where she studied violoncello within the Venezuelan System for youth orchestras, she has been living in Madrid since 1997. She holds a higher qualification in composition from the Real Conservatorio Superior de Música in Madrid and a Master’s degree in musical creation and performance from the Universidad Rey Juan Carlos in Madrid.

She has been working on her compositions as a student of Kaija Saariaho in Paris since 2006.

In 2007 she gave the first performance in the Círculo de Bellas Artes in Madrid of her work Catwalk for ensemble, and won the award of the Centro para la Difusión de la Música Contemporánea (CDMC) in the Injuve 2007 composition competition, for which she was a finalist for three years running. In 2008, the CDMC commissioned her to write Laberinto for the 24th International Contemporary Music Festival in Alicante.

In 2014 the first performances were given of Raindrops for vocal quartet, percussion and piano, and of Los Miserables… por venir, a multi-disciplinary production with music, dance, video and theatre which also involves several pieces of incidental music performed by the improvisation group she directs at the Escuela Municipal de Música y Danza in Arganda del Rey, where she also teaches harmony.

In 2018, her work Cluster Suite for piano was recorded for the IBS Classical label. 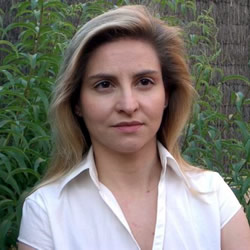 As a composer, she has received commissions from various institutions, soloists and ensembles. Her catalogue, most of which has received performances, includes chamber works for a wide range of instrumental, symphonic and vocal formations as well as for soloists. Her works are frequently programmed in Spanish and international concert series and festivals and have been included in almost a dozen CDs recorded in Spain and the United States. Radio Nacional (RNE2) devoted a whole programme to her music (“Inventario de inventores”) and she has also recorded for Radio France (France Musique) and WXEL National Public Radio (USA).

Her research has resulted in various published studies on composing and experimental techniques.

She holds the Chair and is Head of the Composition Department at the Conservatori Superior de les Illes Balears.

Poet and publisher. She edited the Colección Eme (Escritura de mujeres en español) by Ediciones La Palma. In 2004, she won the 20th Ciudad de Tudela poetry award, in 2014 the Racimo 2014 award for literature and in 2015 the 12th César Simón award with her latest work, La zanja. She has participated in festivals in Spain and other countries, including the Encuentro de Mujeres de Cereté (Colombia, 2016 and 2018), the Festival de la palabra (Venecia, 2017) and The Americas Poetry Festival (New York, 2017).

In 2019 the first performance was given of her work No hay flores inútiles, with choreography by Marco Blázquez to texts by Nuria Ruiz de Viñaspre and direction and staging by Paula Soldevila. 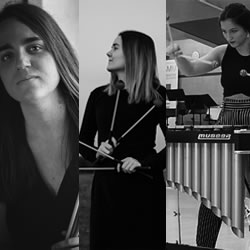 Atropos, Clotho and Lachesis -Las Moiras- are the personification of Destiny. Their fuction is to regulate the life of each mortal, from birth to death, with the help of a thread that the first of them spins, the second weaves and the third cuts at the end of that existence.

The Las Moiras percussion trio is made up of María Berenguer, Celia Berlinches and Irene Chamorro, who all have extensive performance experience in different groups and orchestras, today express themselves in tribute to Dames and Goddesses.